As Indiana Jones returns to our screens, John Preston looks at the Nazi archaeologist who inspired Spielberg's hero, and finds a story more bizarre than anything the director could have dreamt of. (Telegraph via kottke.org) 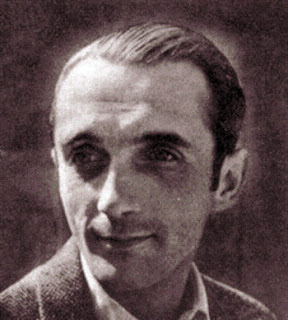 Very little is certain in the short life of Otto Rahn. But one of the few things one can with any confidence say about him is that he looked nothing like Harrison Ford. Yet Rahn, small and weasel-faced, with a hesitant, toothy smile and hair like a neatly contoured oil slick, undoubtedly served as inspiration for Ford's most famous role, Indiana Jones.

Like Jones, Rahn was an archaeologist, like him he fell foul of the Nazis and like him he was obsessed with finding the Holy Grail - the cup reputedly used to catch Christ's blood when he was crucified. But whereas Jones rode the Grail-train to box-office glory, Rahn's obsession ended up costing him his life.

However, Rahn is such a strange figure, and his story so bizarre, that simply seeing him as the unlikely progenitor of Indiana Jones is to do him a disservice. Here was a man who entered into a terrible Faustian pact: he was given every resource imaginable to realise his dream. There was just one catch: in return, he had to find something that - if it ever existed - had not been seen for almost 2,000 years.

What we can say for sure is that Rahn was born in 1904 and at an early age became fascinated with the Holy Grail. At university he was inspired by the example of another German archaeologist, Heinrich Schliemann. Largely as a result of immersing himself in the Iliad, Schliemann had found what he believed to be the ruins of Troy on the western coast of Turkey.

read the rest from Telegraph.co.uk