It's 60 years since the rustic, quirky "deudeuche" was offered to an initially unimpressed public and it's 18 years since the last of five million left the assembly line. You don't see many around any more but the intrepid little 2CV is the object of fond memory for anyone lived those decades. If you're one of them and around Paris, it's worth a visit to the show that the Cité des Sciences has just opened in homage to the little car.

In the post-war years, Italy had its Fiat 500, Germany its VW Beetle and Britain, a little later, its Mini. The Gallic motoring icon was la deudeuche, or the deux-pattes (two paws), as the two-horse car was also nicknamed. The 2CV Expo Show offers a parade of deudeuches through the decades, from the austere, grey-only 1948 model to the retro-chic "Charleston" of the 1980s. 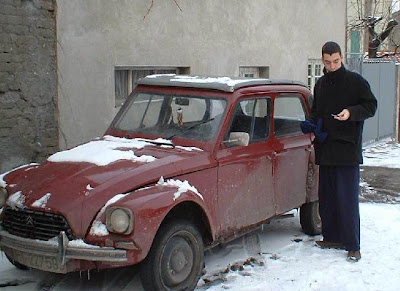 read the rest at Charles Bremner's at Times online (via kottke.org)