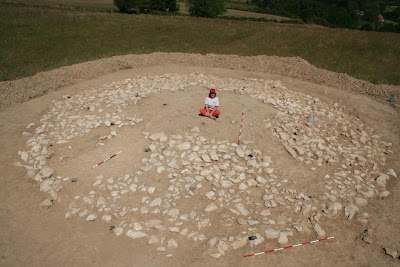 At the site Bukovac-Ilirsko Groblje (translates as Illyrian Graveyard) in the village Bukovac near Mionica (Serbia), rescue excavations of Bronze Age necropolis-under-tumuli are continuing. During the previous campaigns (2004-6), five tumuli made of deposited soil were excavated.

The excavations this year exposed the central, sixth tumulus that stands out architecturally. At least six grave contexts were found in it till now. The mound is rendered special because of its stone construction-base, over which ceramic urns with cremated body remains were laid. In the next few days follows the excavation of the central space of the mound, under which a focal grave context is expected.

More than 110 years ago - in the area around Mionica - the pioneer of Serbian archaeology professor Mihailo Valtrovic, started the first planned research of prehistoric period in the then Kingdom of Serbia. All the archaeological material and the whole archive from his early work disappeared during the First World War. Most necropolises that Valtrovic excavated and registered have been destroyed through farming and agricultural activity, and the Bukovac – Ilirsko Groblje necropolis is one of the rare remaining ones. 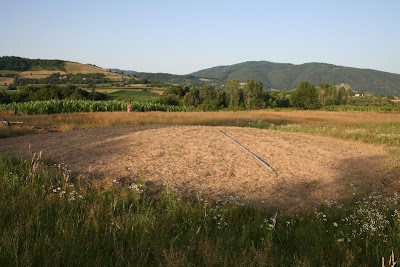 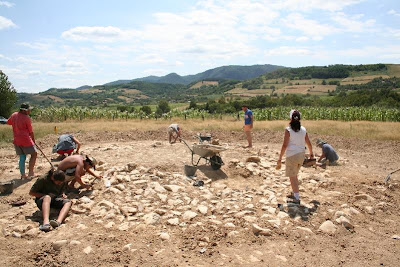 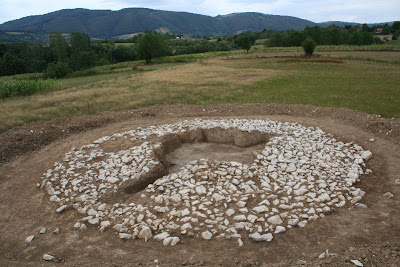 As it turns out - the previously mentioned “central space” of the Bukovac central tumulus was actually Valtrovic’s pit (late XIX century: he had dug a trench through the center of the tumulus, probably found something and then expanded to dig out that huge pit, photo above).

So we did not find anything in the middle, but after lifting the stone “cloak”, the last urn was found - with burnt bones of a five month old fetus, and a lump of red ochre next to it - that Valtrovic missed by few inches. 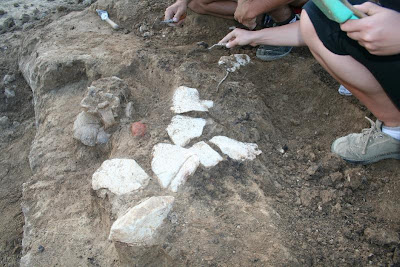 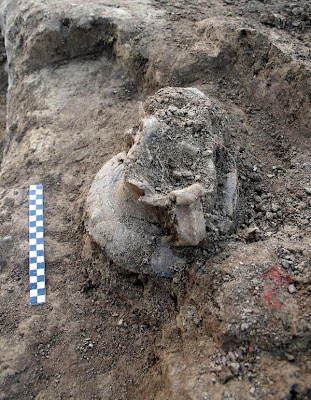 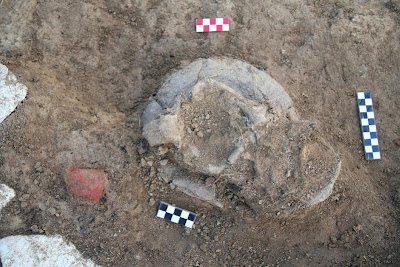 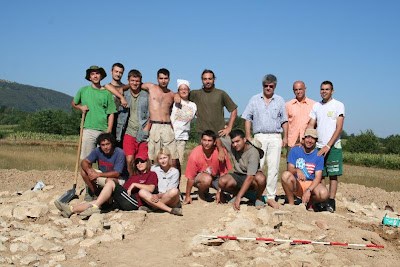 Australian and Israeli scientists have discovered the trigger for the planet's biggest group sex spectacle: the mass spawning of hard corals along Australia's Great Barrier Reef. One week each year in spring, after a full moon, millions of corals release eggs and sperm in what Bill Leggat, a co-author of the new study, called "a slow symphony."
But until now how the primitive animals—which lack brains or eyes—synchronized the mass spawning was a mystery.
more from National Geographic
Posted by Unknown at 12:30 PM No comments:

TESTOSTERONE gradually declines with age, right? Not for the Ariaal - subsistence pastoralists living in northern Kenya. They experience a decline in levels of the male hormone only when they get married. The finding provides a social and evolutionary explanation for the decrease in testosterone, rather than an age-related one.

Ariaal men remain single "warriors" until they are around 30, at which time they marry one or more women. Peter Gray of the University of Nevada, Las Vegas, and colleagues measured testosterone in 205 Ariaal men and found that those with one wife had lower levels of the hormone than unmarried men, and men with more than one wife had the lowest levels of all (Current Anthropology, DOI: 10.1086/522061). "Testosterone levels are lower among married men probably because they are investing less in mating effort," he says. Or to put it another way, they no longer have to compete for mates.

That link between mating effort and testosterone is made clearer by the fact that the Ariaal have an "aloof" marital system: apart from sex, husbands and wives have very little to do with each other, and men are minimally involved in childcare. In a separate study of 203 married Ariaal men, only three participants cited their wife or wives as a source of emotional support.

The Owners of Machu Picchu

Found this one through 3quarksdaily:

When I met Roxanna Abrill, she hadn’t returned to Machu Picchu in years because, she explained, each visit caused her such pain and resentment. It meant having to remember the many things she and her family had lost. It was the summer of 2006 in the southern hemisphere, and the morning she agreed to return, the sun shone intensely in the Andes. We arrived at the end of the line, at the train station of Aguas Calientes, a small tourist town just below Machu Picchu, built in a narrow valley along the flood-prone banks of the Vilcanota River. We walked toward an office not far from the town square, to buy our tickets to Machu Picchu. Or, as Abrill noted, the tickets that would allow her to enter the land she considered to be her own property. She’d never told her story to a journalist before. It just sounded so preposterous.

Abrill claims to be the rightful owner of the land on which Machu Picchu rests—undoubtedly some of the most valuable real estate in the Americas. She was about fifty years old, had never married or had children, in part because she’d been responsible for her family’s finances since her father’s death in June of 1976. He had a heart attack in Lima, while filing a petition to recover a portion of the land that had been expropriated from him. Not long after his passing, Abrill had been awarded a Fulbright to study history in the United States, an opportunity she turned down. Her mother said she would die of sadness if Roxanna left her alone in Cusco, and so she stayed, and has spent much of her adult life caring for her mother. If there is any resentment, she does not voice it. Abrill had worked for years as a curator and historian at the museum at the University of San Antonio Abad in Cusco. In recent years though, her energies have increasingly been focused on collecting all the pieces of evidence that support her family’s claim to its improbable inheritance.

more from The Virginia Quarterly Review
Posted by Unknown at 10:30 PM No comments: 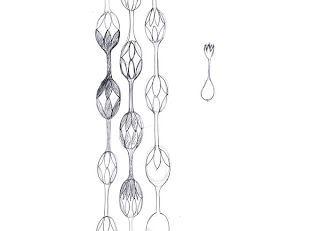 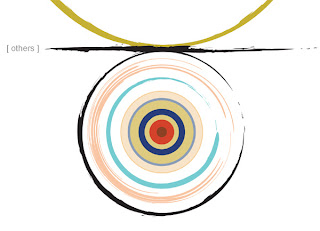 Anyone wants to add own view of time? Check out all the other uploaded visualizations of passage of time, there are some nice ones.
Posted by Unknown at 11:49 PM No comments: