The pilot who shot down Antoine de Saint-Exupery 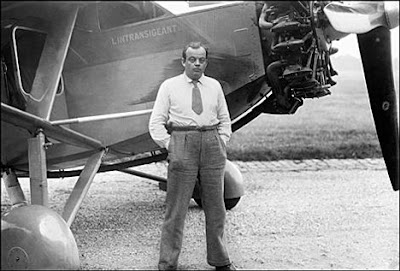 A German fighter ace has just learned that one of his 28 wartime 'kills' was his favourite author.

Messerschmidt pilot Horst Rippert, 88, said he would have held his fire if he had known the man flying the Lightning fighter was renowned French novelist Antoine de Saint-Exupery (in the photo).
The fliers clashed in the skies over southern France in July 1944.

"He was below me," said Rippert. "I saw his markings, manoeuvred myself behind him and shot him down.
"If I had known it was Saint-Exupery, I would never have shot him down. I loved his books.
"I knew he was a French pilot, but he was probably my favourite author at the time."

Saint-Exupery published eight books before his death, including The Little Prince, which has been translated into more than 50 languages.

Rippert gunned down 28 Allied planes during the war and found out about Saint-Exupery only from a historian who is writing the author's biography.

"I am shocked and sorry," the ex-Luftwaffe pilot said yesterday. "Who knows what other great books he would have gone on to write?"

Via kottke.org to The Mail article.